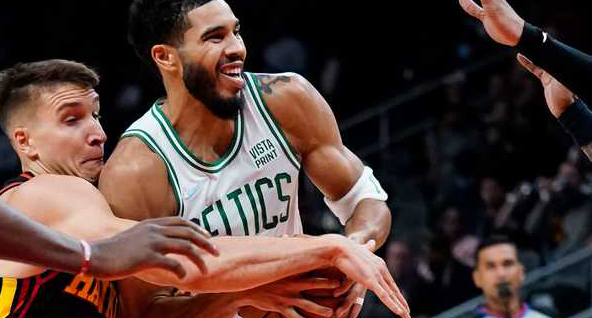 The Celtics failed to close their road trip in Atlanta, falling 99 – 110 to the Hawks on Wednesday.

After beating the Cavs in the second game against Cleveland on Monday, the Celtics traveled south to Atlanta to close out their road game stretch against the Hawks. Atlanta has been struggling a bit, but were on a 2-game winning streak , and sadly for the Boston fans, they managed to extend it to three in at Rogers Arena last night.

As it happened, the game started quite competitively and not too bad for the Cs. Both teams had troubles defending and the first quarter saw 30 points for the Hawks and 29 for the Celtics. But Boston fell off in the second quarter, allowing Atlanta to rack up the points and extend their lead to 9 points at the half. Boston came out stronger from the locker room, but Atlanta was clearly better, adding another 5 points to their lead at the end of the 3rd. The final quarter was the only one won by the Celtics, alas not by enough, scrubbing off only 3 points of the Hawks 14 point lead at the start of the final 12 minutes.

Jayson Tatum was once again the top performer, scoring 34 points with 9 rebounds and 5 assists. Sadly, the rest of the team failed to match his intensity. Grant Williams, who subbed for injured Robert Williams, went for 18 points and 6 rebounds, without a single assist, for the 30 minutes of game time the forward had. Considering G. Williams is coming off the bench, the 18 points were a performance high for the player, but no one else stepped up their game that night. Schroeder scored 15 on the night and Al Horford had 13 points with 7 rebounds.

No one on the Atlanta team managed to come even close to Tatum’s tally, but it was clearly the team effort that delivered their third home victory in a row. John Collins and Trae Young both had a double-double against the Celtics, scoring 20 points/11 rebounds and 18 points/11 assists respectively. Huerter and Reddish both netted 19 points each.

Fortunately for the Celtics, this was their last game on the road, welcoming the Lakers next on Friday at home. The Lakers, still without LeBron James, haven’t been great as of late, and a good game at home would help Boston get back on track right away. Jaylen Brown is still out, while Robert Williams is day-to-day, but is expected to play against the Lakers on Friday.